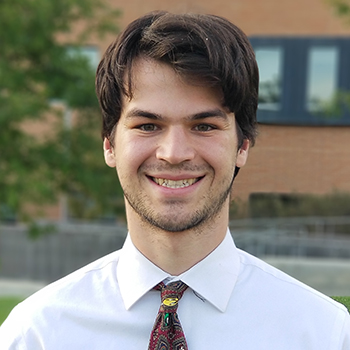 When asked how DBIA NW and the scholarship has helped him in his education and career goals Josiah said “DBIA has given me a networking connection that has served me well within the industry already. The scholarship itself has helped offset the cost of attending a college out of state and allowed me to pursue study abroad in Europe.”

Josiah is going into his fifth year at Cal Poly in San Luis Obispo, CA where he is studying architecture and mathematics. Last year he spent seven months in Europe learning architecture and design in Copenhagen and brings previous experience from MG2 Design in Seattle. After he graduates next year, Josiah plans on working for a GCCM or architecture firm for a few years while getting his architecture license.

Josiah when on to say, “The scholarship with DBIA helped me to formulate my belief of architecture and good design. A building is the beautiful blend of form and function. In terms of how I approach design, I believe that a building must first focus on function for it to be successful, as a building without good functionality is merely a large, experiential art piece. The concept of design-build, I believe, fits greatly into this idea, as design decisions are made with the insight of people that understand the functionality of such decisions. In my month at Lease Crutcher Lewis, I have seen this first-hand. Many design decisions are made with input from superintendents and foremen who know how it will be constructed, which impacts how the other sub-contractors design. As an architecture major, I love making details of buildings, but the likelihood that the details I create are constructible is very low; this is where the integration of the design team becomes important.

I dream of starting my own firm and want to get experience in as many sides of the industry that I can, including architecture firms, GCCM firms, and developers, prior to starting my firm. In a freshman class at Cal Poly, I got the opportunity to interview Denis Hayes, President and CEO of the Bullitt Foundation, who stated “Literature and the emergence of true ‘starchitects’ leave people with the belief that great buildings are the products of Frank Gehry, Jean Nouvel, Rem Koolhaas, Richard Meier, Richard Rogers, and the rest of the large-scale sculptors who care only about visually exciting design. But they are all laborers for hire.” Great building are ones that can be constructed and then function at a high level.”